Doug (author of this blog): Most Christians throughout the world have quite a limited view of Cosmology.  That is going to HAVE to change when disclosure hits.  Richard Rohr, OFM and others are leaders in helping Christians understand our cosmos with a new and broader seeing. I provide comments from the Law of One to correlate what Rohr is saying here.

If you wear glasses, perhaps you’ve experienced receiving a new prescription and suddenly you see the world in a new way. We often get used to “seeing the world” with an inadequate or outdated prescription. It is only when we go in for a check up that we realize we need a lens update, and what a difference it makes! [Doug: As a side note here, contemplation and silence of the mind teaches us how to see more clearly.  Ra says that in order to contact the very inner life of the Infinite Creator, or intelligent infinity, we must learn to embrace mental spaciousness in silence.

“The prerequisite of mental work is the ability to retain silence of self at a steady state when required by the self. The mind must be opened like a door. The key is silence. 5.2″

“The passive meditation involving the clearing of the mind, the emptying of the mental jumble which is characteristic of mind complex activity among your peoples, is efficacious for those whose goal is to achieve an inner silence as a base from which to listen to the Creator. 49.8″ 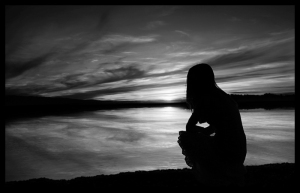 We would further note that balancing which, in this entity’s [Carla] case, is best accomplished in analysis and manifestation seated with the contemplation of silence, may be strengthened by manifested silence and lack of routine activity. 104.3

Cosmology—our understanding of the origins of our world and how our world works—is just like that. How we understand the universe comprises a “lens” through which we tend to understand everything else in life. Many of us who grew up in the church don’t realize that we’ve inherited a pretty blurry cosmology: a usually male God, separate from our world, who stands back and judgmentally observes the goings on of our universe and humanity’s faults and failings. This just does not work, and I do not apologize for saying it. [Doug: That this male anthropomorphic image of God is so strongly held in the belief systems of many, many Christians, is a testament to the busyness and effectiveness of the Service to Self path, the negative polarity.   Ra states: “Any organization which demands obedience without question upon the basis of relative power is functioning according to the [service-to-self] plan” 87.8. Indeed, religions or any social movements at the lower-levels often rely on fear and obedience to keep people from thinking more broadly. This unilateral focus on God as an almighty powerful male may have been intentional to keep the Divine Feminine further from the conscious awareness of adherents.  Luckily, nothing can be stuffed down forever…either on an

individual level or on the collective level. The Divine Feminine is making It’s presence felt more than ever right now.  Many of the readers of this article are longing to see a healthy balance of the Divine Feminine and Divine Masculine and are striving to make this happen in their lives through our actions.]

This view has gone a long way in perpetuating the idea that we are isolated from each other and from God and that there is something inherently wrong with us and the world. Christianity’s adherence to Greek philosophical ideas that matter and spirit are separate has perpetuated a split between theology (or “God-talk”) and science.

Beatrice Bruteau (1930-2014), who brings such profound spiritual intelligence to our necessary conversation, can help us update our cosmology to a lens that is more compatible with science and the world around us. Rather than a God that is removed from us, she explains how the Trinity reveals God as actively moving in and through our world. [Doug: The Infinite Creator as Trinitarian is implicitly found in the Law of One in multiple places.  The very dynamic of creative forces that ushers outwardly in an eternal unfolding requires a dance amongst three aspects of the Infinite Creator: The Creator,

the Created, and the Spirit which burns and pulls in joy and love that comes from deep mutual yearning. ref 4.18.  The spirit of the Infinite Creator and our spirit is one spirit! And the yearning between Creator and Creature is a mutual longing. ref 49.6]

Bruteau writes: What we now call complexity, and recognize as doing its creative work on the very edge of chaos, is at the heart of this miraculous picture. There may not be an external Designer and a micro-managing Providence from the outside, but neither is the world devoid of divinity. The divinity is so intimately present in the world that the world can be regarded as an incarnate expression of the Trinity, as creative, as expansive, as conscious, as self-realizing and self-sharing. [Doug: Ra says that all first primal distortion (from Infinity) is Free Will, and this Law is passed down right through to the sub-sub logoic level (humans).  We ARE the Infinite Creator experiencing Itself through us, as us.]

I have called this creative act God’s ecstasy. Ecstasy means standing outside oneself. It is kin to the kenosis of Philippians 2:6—being God is not a thing to be clung to, so God empties Godself, taking the form of limitation in finitude, and is born as a universe. It is the defining divine act: self-giving, being-bestowing. Ecstasy has the connotations of extreme love and supreme joy. That is right for the creation of the universe. [Doug: This notion of the Infinite Creator’s Incarnation into materiality is known as the Cosmic Christ.  When the Infinite Creator (Alpha) entered into manifestation through the concept of “Finity,” materiality was begotten.  Materiality is not debased nor lacking 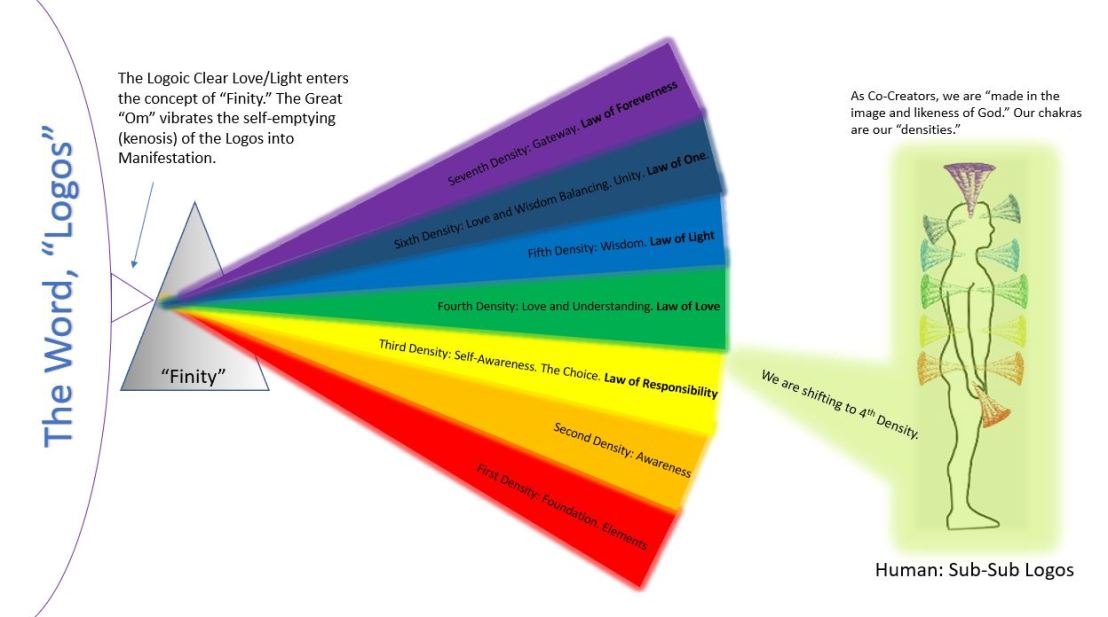 spirit.  It IS spirit, or light, in a congealed form.  It is also inspirited which awakens more and more throughout billions of years to the recognition (gnosis) of itself as Creator (Omega).  Omega rejoins Alpha at the conclusion of experiencing this Octave.  We, Earth humans, are “Omega” in the 3rd density of 8 densities.]

. . . We need a new theology of the cosmos, one that is grounded in the best science of our day. It will be a theology in which God is very present, precisely in all the dynamisms and patterns of the created order, in which God is not rendered absent by the self-organizing activities of the natural world, but in which God is actual as the one who makes and the one who is incarnate in what is made by these very self-making activities. [1] [Doug: This is why those who are intrigued by the Law of One material find this new perspective of the cosmos freeing.  For those few who are mystical Christians, the Law of One often resonates at deep levels and fills out conceptual knowledge.]

Image credit: Winter Leaf II: CAC Gardens (detail), by Nicholas Kramer.
The Divine Presence is happening in, through, and amidst every detail of life . . . penetrates all that exists. Everything in virtue of coming into existence is in relationship to this Source. —Thomas Keating