Noa – Another message of unity being the end goal.  The message he is bringing will probably lead to some fighting between people who need to fight to keep their worldview as is.  The fighting will lead to understanding and to a place where unity happens…?

Very powerful and potentially confusing Logion!  Jesus is the stand-in for the Logos. The Logos, Ra says, is an individuated portion of Intelligent Energy and is Love, Itself.  The Jesus Event seemed to have coincided–which was intentional, I believe–with the planet moving into Christ Consciousness, or the consciousness of the Heart, which is the frequency of 4th density.

Richard Rohr says in his daily meditation from January 15, 2018,

“In Jesus, God was given a face and a heart. God became someone we could love. While God can be described as a moral force, as consciousness, and as high vibrational energy, the truth is, we don’t (or can’t?) fall in love with abstractions. So God became a person “that we could hear, see with our eyes, look at, and touch with our hands” (1 John 1:1). The brilliant Jewish philosopher Emmanuel Levinas (1905-1995) said the only thing that really converts people is “an encounter with the face of the other,” [1] and I think he learned that from his own Hebrew Scriptures.”

Ra and Q’uo clarify that not only did God become a person (what is true for Jesus, is true for us: we are all God-becoming-persons) but a person (Jesus) became God.

Ra says that Jesus was: 1) an entity of no name, 2) a member of the Confederation of Planets in the Service of the Infinite Creator, 3) a Wanderer who volunteered for a mission to bring a message of love to a planet at the beginning of its last minor cycle of third density, and 4) an entity who learned that he was not an entity of itself but operated as a messenger (a pure channel) of love

Here is Q’uo’s quote about the “oneing” between Jesus and the Logos:

“There needed to be one who wished to sacrifice an incarnation to the ever- increasing pleasure and agony of the Creator, experiencing…the slings and arrows of outrageous fortune, for it is the nature of the [Logos] and the nature of third density that the two, perceiving each other, should react—the third density with a lack of understanding, and the [Logos] with wonder, joy and sacrifice. Such is the sorrow of your illusion and the joy of sensation and communion.”

After this bonding, the burden of channeling rather rapidly began to tire the master teacher, Jesus. At the time of the crucifixion… there were almost no tears left, there were no bones unbroken, there was no companionship that had not been betrayed in one form or another. Nevertheless, Jesus the Christ lived well and did not stop the channeling until the breath left the physical vehicle. We witness to this Christ with thanksgiving and joy, not suggesting that any worship or not worship, but celebrating the Creator poured into a channel who could share in full the nature of the Logos, the nature of love, the Creator’s powerful, terrible love.”

Therefore, what we have here is the Logos through the Jesus Event ushering a new pathway of the heart with the goal of creating a people of activated heart energy centers which would organically enlighten the planetary vibration towards fourth density as well as increase the fourth density harvest.

Love clarifies, love intensifies, love illuminates, love burns like a fire that which blocks its climb upwards in the person’s chakra system.  This unblocking can often take years of working through one’s belief systems, falling and failing in relationships, and suffering. Yet, through great love and great suffering, one slowly awakens to christ consciousness as the heart begins to vibrate with the great 4th density love cosmic vibrations ushering in. 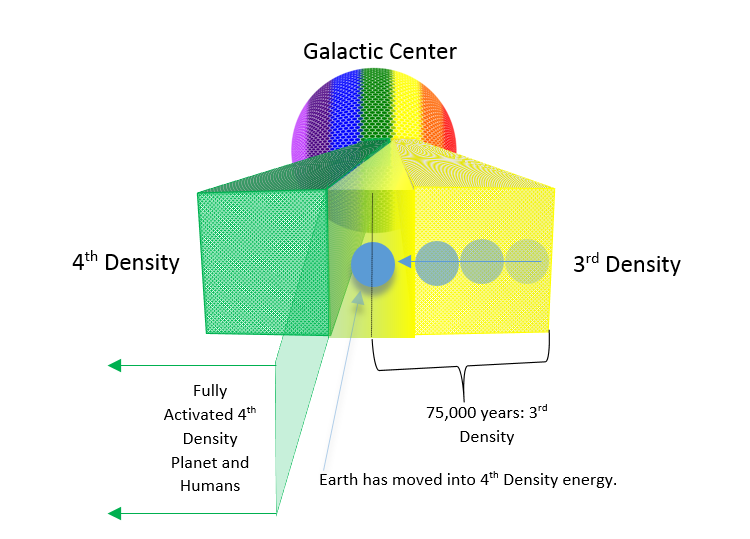 This infighting that Jesus spoke about is the result of Christ Consciousness sweeping through and causing catalysts to allow people to choose more intensely their own pathways.

Finally, “they will stand at rest by being solitaries,” could refer to that when a person has worked through their inner world and engaged with inner shadow boxing enough, then they become more and more whole. “Solitaries,” I believe, is a term that would indicate “single ones,” that is, people who are whole in themselves.  There is a singleness about them, rather than duplicity. There is oneness within themselves and oneness with the Creator. They rest because they are less and less operating from their Floating Selves but are doing the will of God, through their Anchored Selves. Even if their bodies are active and they are engaged in good work in the world, they are not at war within themselves nor with others.  Jesus was the Great Solitary, the Single One, or as he puts it in the Gospels: The Son of Man. This would translate as the archetype of the Human One.

One thought on “Gospel of Thomas with Doug and Noa: Logion 16”