The following may be of interest to a few.  It is a dialog between a fellow member of small online community for those interested in both Christianity and the Law of One.

Friend: Doug, your summary (*see below) of  Christianity and the Law of One: The Jesus Event is really good. I’m of the opinion that if an article can’t be summarized clearly and succinctly, it’s probably a hard read of fuzzy thinking. Here’s what stood out for me in the summary: “The Infinite Creator is a Trinity–a union, or “complex,”–of three aspects whose nature is imprinted in every created thing.”

I have a really hard time with “orthodox” trinitarian theology or belief, especially as expressed in the Nicene Creed. It doesn’t help that reading the history, you find that there were all kinds of interpretations and understandings by these native Greek speakers, and the final version was passed by means of dirty politicking, coercion, threats, violent arguments, beatings, exile, murder, and the use of monks as armed thugs, all this to come up with what amounted to a loyalty oath to enforce peace in the newly empirical state church.

It also doesn’t help that the English translations speak of God as three “persons”, which in my understanding was not the original intention, and which I tend to react to as do Jews and Muslims. I am quite comfortable with your understanding of “three aspects” while at the same time thinking it probably would elicit accusations of Modalism from the heretic police. The sorry end result of Trinitarianism seems to be the belief and statement that Jesus is God, which I find verging on blasphemy and which Jesus never claimed. Yet I personally often call on Jesus as “Jesus, Lord God”, and he seems to understand that I am not trying to oust the Father from His throne, but recognizing his perfect embodiment of the Father. As to that, another creedal utterance that sticks in my craw is Jesus as “Only Son” of the Father. In my mind I’m always saying, “Hey, what about me?” Not to mention us.

Yes, the earth appears to operate in accord with the Law of Three and I have no quarrel with that, nor with the idea that this stems from God interacting with us thru three aspects of His Oneness. I seem to have three main aspects myself or ways of relating, although I know I am not my body, nor my mind, both of which I can observe working and both of which are mine to play along with my spirit. I am using these aspects in this communication, and generally in life, however imperfectly, surely not nearly as well as God or Jesus, but hey, I’m still learning.

Doug: Hey Friend, I really enjoyed your reflection here! Thank you for taking the time to write it. I no longer recite the Nicene Creed when I go to Mass nor do I believe that Jesus was the only Son of God. I also agree that Jesus never said, “Worship me,” but he did say, “Follow me,” several times. By worshiping him, we basically replaced the Father on the throne with Jesus, who still sits “up there” in judgement. Our notion of this kind of god is much more like Santa Claus rather than the deity that people like Teilhard de Chardin intuited. God as Santa sits on “his” throne making lists of who is naughty or nice.

Still, I can understand why the word “Person” was adopted by the Greek theater to describe the different Trinitarian forces. In a way, even with a more cosmic viewpoint, “person” works…. and it might even lead to a better understanding of who we are as “persons,” if we take it seriously. As I understand it (which may not be very well!) “person” is a kind of mask through which essence “sounds through.” From my viewpoint of Ra’s take on the cosmosgensis, the One Infinite Creator is indeed triune with three different but totally necessary “forces” that together, create a new arising: creation. 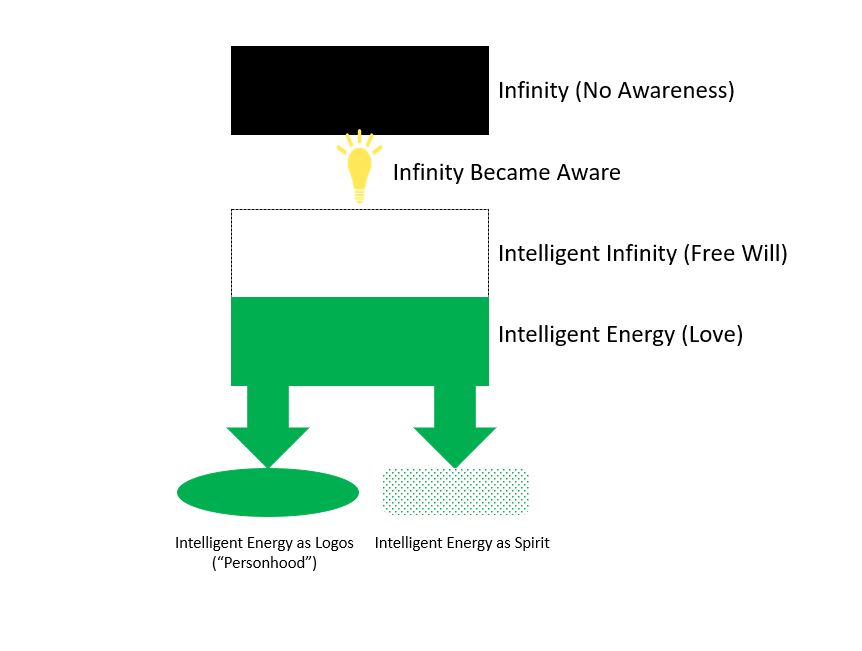 However, these three forces are still masks of the essence “behind” it. That essence is infinity, itself, and is an undifferentiated plenum (ref session 82.6). With the onset of “Awareness” (session 13.6), Infinite morphed into a trinity of sorts: Intelligent Infinity, Intelligent Energy as Logoic, and Intelligent Energy as Holy Spiritual. These three “masks” are key so that Infinity can learn about Itself, infinitely. They are not different from each other nor are they essentially different from the undifferentiated plenum “behind” the “masks” which sources the “sounding through.”

But as the Law of Three and the Law of One would have it, the three forces are differentiations (or distortions) that are key to Infinity’s eternal unfolding into and as creation. So, why use “person” to describe these different forces… this divine template? Maybe it is not the best word, but for Earth humanity’s third density mind, some linking to the “personal” that affects their heart chakra seems to be effective. Ra says that the mode of “relationship” is super important for third density growth. So, if the logos can be seen as a personal deity with whom we can have a relationship, then that would be one very effective way to help the confused, mixed polarity, highly distorted collective mind of us humans to tap the green ray (heart chakra) which is necessary for fourth density harvest and living. Once I can feel the warmth of the logos in my heart and see myself as beloved, then I can see others this way and reach out to serve the Logos (Christ) in them. Such a plan is pretty brilliant and highly threatening to the kind of negative social structuring the Orion (negative polarity groups) desire.

If we pull any of the “persons” out of the Trinity, then we’ve lost the whole point. What is that point? As you say, we are ALL the unfolding of the Creator, within the Creator, as the Creator. We are swept up in the Divine Dance of the Triune God and in fact, are participants in the dance, itself. Through us (the “sounding through”… “persons”), the Creator reacts to the Creator.

I’m okay with Jesus being the “face” of the Universal Christ (Logos) and it is as if the Logos “put on” the Jesus mask because for us Earth humans, such connecting with our kind is very effective and literally, heartwarming (ie heart activating). Richard Rohr says something similar, although he remains within the orthodox belief system that God [uniquely] became Jesus. “In Jesus, God was given a face and a heart that we could see. God became someone we could love. While God can be described as a moral force, as consciousness, and as high vibrational energy, the truth is, we don’t (or can’t?) really fall in love with abstractions or concepts. So, God became a person “that we could hear, see with our eyes, look at, and touch with our hands” (1 John 1:1). The Jewish philosopher Emmanuel Lévinas (1906–1995) said the only thing that really converts people is “the face of the other.”

So, to sum (I am too wordy… but thanks for accepting me thusly, Friend!) from my point of view, even the “Father” (Intelligent Infinity), the “Son” (Universal Christ or Intelligent Energy as Logoic), and “Holy Spirit” (Intelligent Energy as Spiritual) are “masks” that sound through that which stands “prior,” that which is sourced: Infinity. That’s why the word, “person,” doesn’t bother me. And if we take the dynamic of “person” at its word, then we can see that we are the One Infinite Creator clothed as you and me, we are the masks (the persons) through whom infinity speaks and engages with Itself right here within third density.

Lastly, everything becomes  a “person” or mask of the Creator.  Everything is highly personal and replete with divine intimacy.  St. Francis of Assisi certainly intuited this when he called things in nature “sister” and “brother” (ie “sister moon,” “brother sun,”).  Then, of course the Ra group themselves state succinctly that all things, including the moment we are in, are the Creator (session 10.14) and every encounter with anything is actually the Creator encountering Itself (session 53.9). Amen!

Note: none of this language of “prior” or “before” is really accurate, though. The whole divine creative unfolding is taking place in the Eternal Now. But it is not too bad a way to attempt to describe these things from a third density point of view, behind the veil.

*Summary: This article attempts to bridge the “apparent” gap between the metaphysics of Christianity and the Law of One material. For this author, the Law of One material is the clearest presentation of the Perennial Philosophy which undergirds all of the world’s major religions. Through the Jesus Event, the fullness of the Logos organically sprouts up and out of the soil of third density Earth, our current collective bandwidth of conscious awareness, to reveal the One Infinite Creator’s very nature: Oneness emanating as Love in order to self-manifest in an eternal act of creating so that Infinity can experience Itself/Godself in infinite variety. It is a benevolent universe and Love is the God-glue that holds it all together. The Infinite Creator is a Trinity–a union, or “complex,”–of three aspects whose nature is imprinted in every created thing. Those three aspects are the spirit, the mind, and the body and can be found from the macro level to the micro. In Jesus, the Infinite Creator was given a face and a heart so that humanity could fall in love with a person and be transformed in and through relationship. Jesus became the visible icon of the invisible God. Through Jesus’ life, his acts of healing and forgiving, his crucifixion, and his resurrection, everything was revealed for all to see: 1) God is merciful and loving, 2) separation from God is an illusion, 3) Jesus put an exclamation point on the fact that God incarnates as the material universe, 4) all things die and rise in transformed forms–this is the secret of how the Creator perpetually creates, 5) relationships and forming ecclesias are essential to activating the heart so that, 6) we can be ready to inherit the new earth, the kingdom of God, the New Jerusalem, which are Biblical terms for the fourth density bandwidth of conscious awareness. The Ra group, other members of the Confederation of Planets in the Service of the Infinite Creator, the angelics, the demonics, and negative factions such as the Orion Empire are all players in the theater of the octave of conscious awareness. Everything belongs. Christianity is not so much a religion to join but rather, 1) it is a way of seeing and living in the world that underscores the unity of all things held together within the One Infinite Creator, and 2) it is a call to action to build the new earth–that fourth density condition–through serving the Logos, “Christ,” in other people and in our world.