I believe  that the Hero’s Journey and the Wheel of Karma are the same thing.  The idea is that as a hero 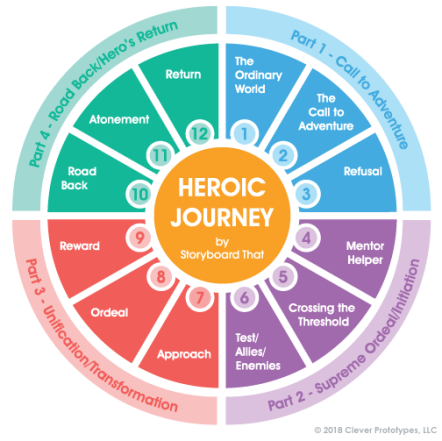 matures and learns humility through some great act of vulnerability and surrender, he or she rises to the final occasion and accomplishes the great feat of their life.  They end up returning to where they started but now transformed. They are a “resurrected” version of themselves.

From another perspective, in order for the hero to arrive at the crossroads wherein they are invited to radical vulnerability prior to some act of courage, he or she passes through the process of reconciliation.  They become reconciled with their fate, with their past, with their destiny, and they do this all through surrender and acceptance.  A synonym for reconciliation is forgiveness.

The Wheel of Karma

In the Law of One, Ra speaks clearly that “in forgiveness lies the stoppage of the Wheel of…Karma” (Session 17.20). Acceptance and forgiveness are the two-pronged pathway that prepares a person

to die… to die to their attachments, to die to their ego’s pursuit of power, prestige, and possessions, and then to die in some way through the confrontation with the adversary. All of this dying is for the sake of the rising that happens afterwards. To use more modern language, to “die and rise” is to undergo the process of positive transformation.

The Paschal Mystery is Christian language to describe the death and resurrection of Jesus Christ.  This particular dying and rising has cosmic implications because the Logos, Itself,

was showing the world through what I am calling, the Jesus Event, that the whole pattern of reality follows the same path.  There is only one journey: death and resurrection.  Moreover, the Paschal Mystery is the archetypal Hero’s Journey with a special twist that has implications for all of humanity. In Jesus’ case, what was the great adversary that he was “combating?” What was his “dragon?”  The Scapegoat Mechanism.

It is as if the Logos (and/or senior members of the Confederation of Planets?) were trying to say to all of humanity:

“Stop scapegoating other people, other religions, other problems that are outside of you! By scapegoating, you project your shadow elsewhere and this keeps you trapped in third density because you just keep repeating your karmic lessons without learning the lessons!”

Jesus became the Scapegoat willingly so that we could see what we have done… we are supposed to be shocked at the implications of not recognizing pure Love/Light when It comes before us, in our midst–as one of us–and then killing this Light. He became “sin” [the Scapegoat Mechanism] so that we could individually and collectively stop scapegoating and start accepting and forgiving everyone, including ourselves, including reality, for all of the imperfections, pain, hurt, and imbalances.

—”In forgiveness lies the stoppage of the Wheel of Karma.”

The greatest hero’s journey is the one in which we confront our own places of hurt, betrayal, trauma, sadness, grief, and neediness.  Many won’t go there. They would sooner be angry and point fingers than surrender into vulnerability.

Therefore, what might be a symbol of this mystery that can be described as 1) the Wheel of Karma, 2) the Hero’s Journey, and 3) the Paschal Mystery? Ra and wisdom traditions offer the perfect symbol: the ankh. To paraphrase Ra, the ankh symbolizes the truth 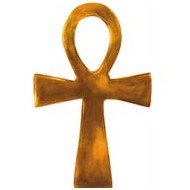 behind sayings such as:

Finally, through the Jesus Event, humanity was given a living icon of the ankh through what we now call, “the crucifix,” or “the cross.”  What am I saying here? In sum, the Wheel of Karma, the Hero’s Journey, the Paschal Mystery, and sacrificial love are all captured by the great archetypal symbol of the cross.  The cross is, in other words,  a great icon of invitation to:

To choose to live the way of the cross is the Hero’s Journey.  It relieves karmic debt and brings karmic balance because in order to live such of a life of humility, surrender, vulnerability, and great courage, one has to be actively and intentionally engaged in deep spiritual practice and inner work so that we can learn how to die before we die.  There is no other way to live that life.  But it is a life worth living because this is how the cosmic light gets in.