Skip to content
Do you know anyone who may be curious about reincarnation?  Are you curious?  This

article is not to convince anyone of anything but to express a way to understand reincarnation that doesn’t necessitate one to throw out entire belief systems, especially Christianity. I have come to believe in the phenomenon of reincarnation. But, it has not affected my faith or my self-understanding in this present life in any dramatic way.  Many others are also accepting the facticity of reincarnation and these include psychologists and psychiatrists who have stumbled upon information gathered from clients during trance states. In part two of this reincarnation series, I offer links to some of that research and I encourage you to check out their results. You might be surprised.
In the New Testament of the Bible, we find several verses that speak of a kind of “place of purging” where the soul is refined in the fires of love so that it can withstand the pure light and love of God.  For example, Matthew 5:25 and Luke 12:59 say that liberation from this place of purging will happen only after there 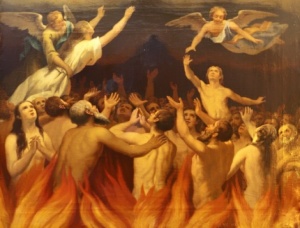 has been a full payment of the price: “Amen I say to you, you will not be released until you have paid the last penny.”  Some traditions reason that since no penny needs to be paid in heaven and from hell, there is no liberation at all, then there must a third place.  Catholics have chosen to call this third place, “Purgatory.”
There is a kernel of wisdom within this concept. Although, it is important to remain aware that this teaching of purging and burning has been used in horrific ways by those acting under the banner of Christianity, from a mystical perspective, the concept of purging and burning is not about violence towards ones’ self or others. Instead, it is about a journey of personal and collective transformation. Returning to the Catholic tradition of heaven, hell, and purgatory, it may very well be that the idea of three separate “places” is limited. Instead, as we will see below, there is a spectrum of conscious awareness and souls are not assigned a place to go after death but rather they, themselves, choose where they feel most comfortable depending upon their ability to withstand the luminosity of the wholeness of unity.  But first, let us look at other verses in the Bible that describe a kind of purging or burning.
__________________
1 Corinthians 3:11-5 (NRSV): For no one can lay any foundation other than the one that has been laid: that foundation is Jesus Christ. Now if anyone builds on the foundation with gold, silver, precious stones, wood, hay, straw – the work of each builder will become visible, for the Day will disclose it, because it will be revealed with fire, and the fire will test what sort of work each has done. If what has been built on the foundation survives, the builder will receive a reward. If the work is burned up, the builder will suffer loss; the builder will be saved, but only as through fire.
Matthew 13:39-40 (NRSV): and the enemy who sowed them is the devil; the harvest is at the end of the age, and the reapers are angels. Just as the weeds are collected and burned up with fire, so will it be at the end of the age.
____________________
The fiery place that is referred where all of this wailing, gnashing of teeth, purging, and

burning takes place in these versus is a called Gehenna. It was a real location situated outside city walls in ancient times and that’s where the trash was burned.  It is meant as a metaphor to suggest that both on the collective and individual levels, there are shadow sides that need to be purged or burned off so that we can see, embrace, and enjoy more and more light. But what, you may ask, are these shadow sides that need to be burned and purged?  And how does that happen? The answers are not that unfamiliar to you if you have ever dealt honestly with your own inner struggles. More on that below, but first, we need to introduce a metaphysics that is as old as humanity, itself.
Within the Perennial Tradition, which undergirds the majority of the world’s major religious and spiritual traditions, we find room that can hold together esoteric traditions (hidden teachings and inner wisdom schools of thought) and exoteric traditions (outer teaching and conventional religions and denominations).  Understanding the Perennial Tradition is important to see how reincarnation naturally fits within the bigger picture.
A Metaphysics of Unity
The following two selections are from Rev. Richard Rohr, OFM, daily meditations on the Perennial Wisdom:
___________
7-30-18
You can call it the collective unconscious; you can call it globalization; you can call it the One Spirit of God—the question is, why are so many people from different cultures,

countries, ethnicities, educations, and religions saying very similar things today? This really is quite amazing and to my knowledge has no precedent in human history.
We are rediscovering the philosophia perennis, the perennial philosophy—an early nineteenth-century phrase that pointed to an idea of a shared universal truth. Some of us called it the “wisdom tradition” which keeps showing itself in all of the world religions throughout history. This wisdom cannot be dismissed as mere syncretism—a word sometimes used to dismiss something unfamiliar or different as merely lightweight thinking, skepticism, or just wrong.
As Rabbi Rami Shapiro explains it, “Perennial wisdom isn’t unique to any specific system of thought or belief, but rather a set of teachings common to all of them. Each articulation of perennial wisdom takes on the flavor of the system in which it rests. Mistaking the flavor for the substance leads us to imagine differences where none exist.” [2]
One way to summarize the essence of perennial wisdom (to paraphrase Aldous Huxley) is:
August 2, 2018
All wisdom traditions have something to say about four important matters: (1) the nature of ultimate reality, (2) the possibilities for human knowing of this ultimate human reality, (3) the nature of personhood, and (4) the goal of human existence. . . .
1. However named, God is the Ultimate Reality. Language does not serve us well to describe this Ultimate Reality since it is so profoundly supra-human and trans-personal. . . . All names for this foundation of existence point to the same reality—a reality that . . . is both transcendent and immanent, not set apart from the world of humans and things but deeply connected to everything that is. . . .
Ultimate Reality is the source, substance and sustenance of all that is. Nothing exists without it. To be removed from this vital connection would be to instantly cease to exist. We exist because we are in relation to Ultimate Reality, or, more precisely, because we exist within it. . . .
2. The mystics of the Perennial Wisdom Tradition assert that direct, immediate knowing [of Ultimate Reality] is possible. They tell us that such knowing is not based on reason or deduction, but on communion. . . . Knowing is intimate, and this intimacy is transformational. We come to resemble that which we know. . . .
3. There is a place in the depths of [the human] soul in which Ultimate Reality alone can dwell, and within which we dwell in Ultimate Reality. . . .
4. The knowing that humans seek, in every cell of our being, is to know the source and ground of our existence. This, the Perennial Wisdom Tradition teaches, is the goal and meaning of being human. Life has a direction. All of life flows from and returns to Divine Presence. . . . Union with Ultimate Reality is sharing in the divinity of Christ. It is participating in the Divine Presence. This is the fulfillment of humanity. . . .
[For Christians,] the moral of the Perennial Wisdom Tradition is, “Don’t settle for anything less than the truth of your Christ-self.” The ego-self, with which we are all much more familiar, is a small cramped place when compared with the spaciousness of our true self-in-Christ. This is the self that is not only at one within itself; it is at one with the world, and with all others who share it as their world. . . .
Awakening is the expression of that grace in which we see through our apparent separation and notice that we are already one with divine Presence and with all that is. All that is missing is awareness.
__________________ 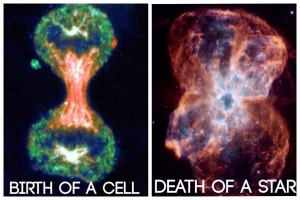 That last paragraph is the key to understanding the Perennial Tradition’s metaphysics of oneness and the unity of all things.  The truth of reality is that there is no separation between creature and Creator.  In fact, we are the Creator having an experience of being a creature. We are part of God’s eternal self-exploration and creativity.  And the primary role of spirituality, no matter to what tradition one belongs, is to lead us ever more towards seeing, living, loving, and enjoying this unity.  As Teilhard de Chardin, SJ, said in the early 20th century, “We are not human beings having a spiritual experience. We are spiritual beings having a human experience.” To awaken to this truth and then enjoy life’s gifts and challenges from this perspective is certainly a kind of enlightenment.

Can one get to the level of this kind of gnosis (experiential knowing) in the few years we have of this lifetime?  While it is possible, it is likely not probable.  Our Earthly experience can be understood as a classroom to learn about the facets of love and just as it is true that one would not give graduate-school work to a kindergartner, there is a kind of learning process that takes places through various lifetimes that build upon each other.  “Grade levels” that we have in traditional education are “lifetimes,” and you pick up where you left off the next time around.  This doesn’t sound so foreign or strange, right?

What is Karma?
Karma, or reaping what we sew, is the great cosmic law that propels souls through the journey.  It can be understood as a kind of inertia wherein our thoughts and actions are put into motion. We set off a momentum that acts like a teacher in the classroom of life who will continue offering us lessons of love until we understand the material.

Understanding the material means that we see and accept the consequences of our actions and thoughts. Stopping karma, or to use our classroom analogy, passing the test of the lessons offered, is solely accomplished by forgiving ourselves and others. Karma and forgiveness seem like two different concepts but in reality, they are inseparable.
At the beginning of the incarnative process, newly minted souls are just awakening to awareness of self.  Over the life and possible lifetimes, the new soul becomes slowly aware that he or she has needs that are not animalistic. It dawns on them that there are needs that are not useful for survival of the body, but are paramount for feeding the mind and spirit.  These include: the need for companionship, the need for laughter, the need for beauty, the need to know the universe about us.   As the soul incarnates more and more, further needs are discovered: the need to trade, the need to love, the need to be loved, the need to elevate animalistic behaviors to a more universal perspective.
During these first few lifetimes of a beginning soul, incarnations are automatic and occur rapidly after death. There is little need to review or to heal the experiences of the incarnation. But as a soul progresses in learning the lessons of love, then more time is given to reviewing and healing of the previous incarnation and preparing for the next one.  This is when the incarnations cease to be automatic and one works with guides and friends to plan the next mission that will take place through incarnation.

2 thoughts on “Reincarnation for the Curious Christian, Part 1”