In the days when you ate of what is dead, you made of it what is living. When you come to be light, what will you do?

On the day when you were one, you became two. But when you have become two, what will you do?

Yeshua says…   The sky and all that lies in the dimensions above it will cease to exist.

The dead know nothing of life, and the living will never die.  When you consume that which is already dead, you are turning it back into life.

Noa:  First thoughts, but I will think on this for a few more days and add more as it opens up to me:

Noa, you are doing amazing work here.  I love what you wrote. Here’s my take.  There are always many layers of meaning to each of these sayings.  No one meaning is the right one. That’s why it’s so fun! So much to discover and unpack….

This heaven that will pass away could suggest that “heaven” is 3rd density, which is passing way.  The 4th density, which is “above” it, at least vibrationally speaking, will also pass away into the 5th (in millions of years).  Those who are “dead” are not ones who have activated their hearts (the way Cynthia Bourgeault and Ra, from the Law of One material, talk about).

In reality, they are not dead and will never die since they ARE the Infinite Creator, but 3rd density is often considered a plane of “death” since it feels like there is such a separation from us and God and us from each other.  The “veil of forgetting” which characterizes 3rd density feels like exile, death. And, honestly, Earth is a planet of 3rd density repeaters–that’s who makes up most of Earth’s humanity. And, most of us will continue to go to other 3rd density planets after Earth shifts into the 4th Density (4th density= the “New Jerusalem,” the “Kingdom of God,” mentioned in the Bible) and try again for another round (75,000 years) of learning the lessons of polarity. 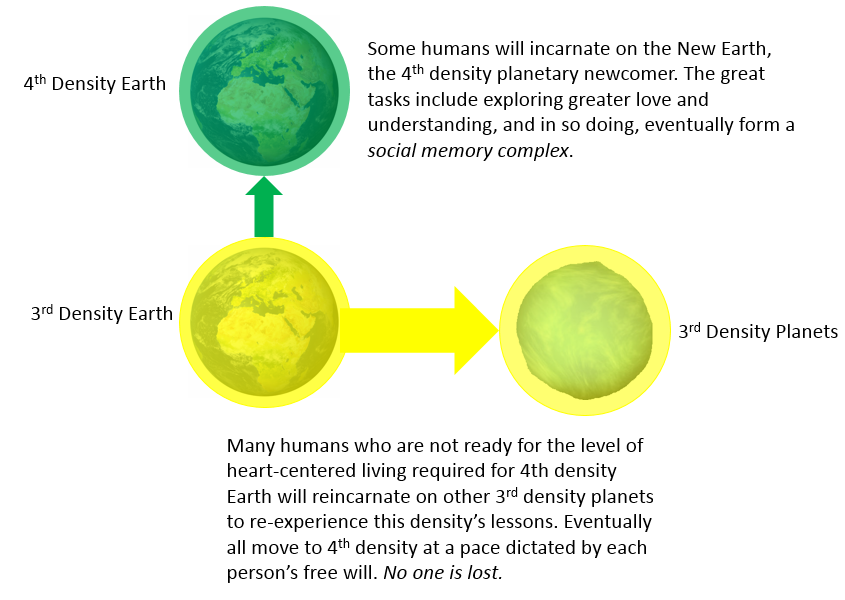 Those on the positive path have to learn how to access the heart through really seeing how all of us are one, that the Earth is us and we are the Earth, that in Love, all is united. And that we have a mandate grounded in love to help our other-selves when there is a calling.  Here’s a very important statement from Ra on this matter:

13.23 ▶ Questioner: How does a third-density planet become a fourth-density?

Ra: I am Ra. This will be the last full question.

The fourth density is, as we have said, as regularized in its approach as the striking of a clock upon the hour. The space/time of your solar system has enabled this planetary sphere to spiral into space/time of a different vibrational configuration. This causes the planetary sphere to be able to be molded by these new distortions. However, the thought-forms of your people during this transition period are such that the mind/body/spirit complexes of both individual and societies are scattered throughout the spectrum instead of becoming able to grasp the needle, shall we say, and point the compass in one direction.

Thus, the entry into the vibration of love, sometimes called by your people the vibration of understanding, is not effective with the present societal complex. Thus, the harvest shall be such that many will repeat the third-density cycle. The energies of your Wanderers, your teachers, and your adepts at this time are all bent upon increasing the harvest. However, there are few to harvest.

That is what Christians were supposed to be meaning when they said, “I’m saved,” or “born again.”  Unfortunately, for most who say such things, it’s an ego statement and doesn’t indicate inner transformation. How many people have we met who feel pretty sure that they are saved and born again, but does their way of living in the world indicate real transformation? I can’t say, but actions and words bespeak the truth inside.

“When you ate of what is dead and made it living,” could refer to both the literal thing that you eat (which is dead, as you say) and it relives inside of us, as us.  But it could also refer to the lower three chakras (the lower chakra triad) which are paramount for 3rd density living.  They are fundamental and very important.

However, those who can’t access the 4th chakra (heart) enough,  begin to create a closed energy loop in their lower chakra triad and thus are entrapped there, in 3rd density zeitgeist and conscious awareness [and they don’t know it!].

The negative elites who have created the cultural thought structures know how to keep people “entrapped” in their lower chakras. Yet, when we activate the heart, we enliven both the lower triad by having unblocked the upstreaming of prana (divine life force) and we have access to the upper chakra system.  This is real love/light. Once we have an activated heart and access to the upper chakras (which is real will, faith, power), how can we use this to do good in the world? What will we do?

“On the day when you were one, you become two. But when you have become two, what will you?” “On the day” may refer to the entrance of “time” on the scene.  When the Infinite Creator decided to manifest, time as we know it from 3rd density perspective started. Time feels linear.

At this point, we have both the divine nature and the created nature, just like Jesus.  He is often pictured holding up 2 fingers in his right hand. This means that he is saying he is both God and man, the two natures. We are the same exact thing. We are God and creation. Therefore, once we claim this divine truth for ourselves, we have awakened to a certain level of conscious awareness.  We are like Jesus. Once we’ve awakened to this level, what are we going to do about it? Better get busy building the kingdom!! And what is the kingdom of God? Spreading love, seeing love everywhere, living 4th density ethos right here and now, just like Jesus did!

One thought on “Gospel of Thomas with Doug and Noa: Logion 11”